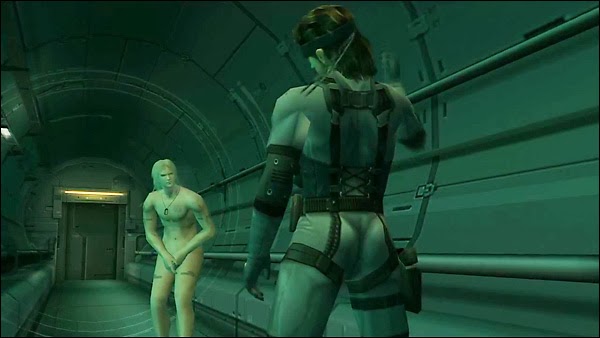 In my mind, Metal Gear Solid 2: Sons of Liberty, represents the high-water mark of the series. Not only did it constitute a tremendous technical leap over its predecessor, Metal Gear Solid, it engaged in a level of narrative and ludic experimentation yet to be truly rivaled by any other game. Kojima wanted to make a statement with MGS2, and he pulled it off with panache.

Perhaps no moment in MGS2 captures its ambitions more effectively than its most infamous one. After completing an opening prologue in which the player once again takes control of the super soldier, Solid Snake, he or she finds out that for the rest of the main game, he/she will actually be playing as a slightly effeminate and utterly unknown rookie, codenamed Raiden. The move was a total bait and switch. Kojima had carefully concealed the new character from all promotional materials and previews of the game. Many fans of the first installment were outraged, others were simply baffled. It was the memorable character of Solid Snake that had made so many of them fall in love with the first game, and they fully, and reasonably, expected to reprise that role in the sequel.

I don't think it's at all a stretch to say that Kojima castrates the gamer by making him play as Raiden. His notable femininity (long, flowing hair, wide hips and narrow waist, soft voice and smooth skin) all point to an essential unmanning of the player. The same can be said for the introduction of Raiden's girlfriend, Rose, as part of the mission team. She calls Raiden on the codec to discuss relationship issues as often as she calls for mission support. The emotional talk, like Raiden's body and demeanor, has the effect of making the player feel like he is losing control over the situation.

The strong reaction of so many (mostly male) players to the switch supports this reading. The guys did not like having their "Solid Snakes" taken away from them, only to be replaced by what they perceived to be an inferior and androgynous "sissy-boy." They were angered and frustrated because their power trip was stolen from them before it even got started.

The sudden introduction of Raiden in this way, however, wasn't about trolling players, nor was it merely a plot device to make Solid Snake an even more larger than life figure, as a recent Edge retrospective claims. The point was to disrupt the identificatory link between the gamer and the game, to create a critical distance between the player and the "information machine."

The discovery of Raiden was immersion breaking in the extreme. As an act of castration, it severed the player from his connection to the game. Suddenly, he is pulled out of the immediacy of action and pressed to contemplate the meaning of the moment. Amidst that spell, the player is presented with a host of themes and problems to begin to consider.

For instance, riding that elevator up to the top of the Big Shell, each and every player had ask him or herself, on some level, who is this new character?

As it turns out, Raiden represents the player's self as a gamer.

Raiden has no real combat experience. All of his training comes from VR simulation. Like the player, he is the mere image or reflection of what Solid Snake is in actuality.

Although we learn these details over the course of the game, during that elevator sequence, we actually experience their impact for ourselves in real time. We too are mere simulations of heroes, dreamers who forgot momentarily that they were in a dream, and the revelation of Raiden was like a bucket of cold water thrown in our faces.

We don't have to imagine how Raiden feels in relation to Snake because we have already undergone the same realization in relation to the game itself. And so right from the get-go, by cutting us off from the self we invested our egos in, the game involves us in the search for identity that is  the center of MGS2's narrative.

The conversations about the dawn of the internet, VR, meme theory, and genetics that will follow all attempt to approach this concern from different angles. But the switch to Raiden is perhaps the moment in which the issue most powerfully impresses itself upon the player, even if for some it remains latent or unconscious.

This moment of having the rug pulled out from under player was clearly something Kojima felt passionately about. MGS2 was, without exaggeration, the event of the PS2 era. It was the mega-blockbuster console exclusive to end all mega-blockbuster console exclusives. Thus, the financial stakes of the game were immense. Such scenarios are not ones in which game makers and producers are wont to take chances. It would have been easy enough not to rock the boat and just give players more of the Solid Snake they were looking for. But Kojima defied them, and consequently risked alienating them as well as severely undermining the series' future, for the sake of creating a powerful moment to frame a narrative journey that would continue to the game's end.

Kojima did this at a time when hardly anyone was taking video games seriously as aesthetic objects. Consequently, through MGS2, he contributed greatly to the currently developing appreciation of the medium as more than mere entertainment. For this reason, it marks one of Kojima's and the series' finest moments.
Posted by gamephilosophe at 12:07 AM